Nonlinear Optics in AlGaAs: Past, Present and Future Prospects 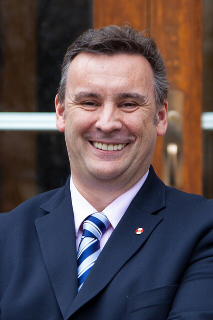 Abstract: The III‐V semiconductor AlGaAs is an ideal nonlinear optical material. It has large second and third order nonlinearities, a low two‐photon absorption coefficient at the half band gap and allows for the easy fabrication of integrated optical devices. In additoon, AlGaAs can be used directly integrate photodiodes, modulators and passive optical elements on the same chip as the nonlinear elements. This talk will highlight the benefits of this nonlinear material present examples of key experimental results on spatial solitons, optical switching and wavelength conversion. Recent results on the generation of correlated photons will be presented and finally the future applications of AlGaAs in quantum optical systems will be considered.

Biography: J. Stewart Aitchison received a BSc and a PhD from the Department of Physics, Heriot‐Watt  University, Edinburgh, in 1984 and 1987 respecvely. His PhD dissertation research was on optical bi‐stability in semiconductor waveguides. From 1988 to 1990 he was a Postdoctoral Member of Technical Staff at Bellcore, Red Bank NJ. His research interests there were in high nonlinearity glasses and spatial optical solitons. He joined the University of Glasgow Department of Electronics and Electrical Engineering in 1990 and was promoted to a Personal Chair as Professor of Photonics in 1999. His research in Glasgow focused on the use of the half band gap nonlinearity of semiconductors for the realization of all‐optical switching devices and the study of spatial soliton effects. He also worked on the development of quasi phase matching techniques in semiconductors, monolithic integration, optical rectification, and planar silica technology. His research group developed novel optical biosensors, waveguide lasers and photosensitive direct writing processes based around the use of Flame Hydrolysis Deposited (FHD) silica. In 1996 he held a Royal Society of Edinburgh Personal Fellowship and carried out research on spatial solitons as a visiting researcher at the CREOL, University of Central Florida. Since 2001, Professor Aitchison has held the Nortel Chair in Emerging Technology in the Department of Electrical and Computer Engineering at the University of Toronto. His current research covers all‐optical switching and signal processing, optoelectronic integration and optical bio‐sensors. From 2004‐2007 he was the Director of the Emerging Communications Technology Institute at the University of Toronto, where he established a $30 million open access facility for micro and nano‐fabrication. From 2007‐2012 he served as Vice‐Dean Research for the Faculty of Applied Science and Engineering, University of Toronto. Since 2013 he has been the Associate Scientific Director for the Canada–India Network Centre of Excellence, IC‐IMPACTS where he is responsible for the mobile health research theme.