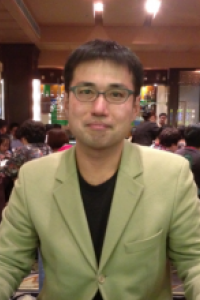 Toshi Kamei obtained his B. S., M. S. and Ph. D. in Physical Chemistry from Kyoto University, Kyoto, Japan. He used to work at Panasonic and Electrotechnical Laboratory where he performed research on amorphous Si and microcrystalline Si solar cells. From 2000 to 2002, he was awarded a Japan Science and Technology oversea fellowship. During this period, he was a visiting scientist at Stanford University for the first year and University of California, Berkley, for the second year. From 2002 to 2003, he was a postdoctoral researcher at UC Berkley. During his stay at Berkley, he has proposed and developed an integrated amorphous Si fluorescence detector for microfluidic biochemical analysis. As of 2003, he has worked at National Institute of Industrial Science and Technology (AIST), Japan. As of 2017, he is a chief senior researcher at GaN Advanced Device Open Innovation Laboratory, AIST. His research interests include GaN laser, Si photonics, microfluidics, MEMS and solar cells. His ideal life would be going back and forth between US and Japan to leverage the advantages of each country.

He is currently a visiting scientist of Prof. John Bowers group at University California, Santa Barbara. His google scholar citations can be found at