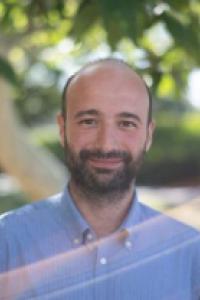 Paolo Pintus was born in 1983 in Cagliari, Italy. He received a bachelor degree (Laurea Magistrale) with honours in electronic engineering from the University of the Studies of Cagliari, Italy, in 2005 and the masters degree (Laurea Specialistica) with honours from the same university in 2007. For his master thesis: "Mathematical principles for the design of photonic crystals" he received the Meucci-Marconi Prize

During 2007 he was a visiting student (Leonardo da Vinci programme) at the Department of Biological Sciences of the Imperial College of London, United Kingdom, where he was involved in signal processing and pattern recognition concerning malaria vaccine detection.

In January 2008 he joined the Scuola Superiore Sant'Anna in Pisa (Italy) where he received a Ph.D. in Innovative Technologies of ICT and Robotics, defending the thesis "Design of silicon based integrated optical devices using the finite element method".

He is currently Project Scientist at the Optoelectronics Research Group at University of California Santa Barbara. He is Senior member the IEEE Society, the IEEE Photonic Society, and the Italian Society for Industrial and Applied Mathematics (SIMAI).

His research interests are in the field of integrated optics, silicon photonics and numerical methods for electromagnetism.